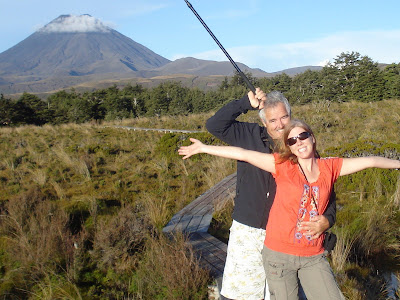 Last weeks adventure was a trip to Tongariro National Park. Tongariro was New Zealand's first national park and is home to three active volcanoes. The park has two ski areas, loads of hiking trails and is definitely one of NZ most exciting parks. Ruapehu, the most active of the volcanoes last erupted in 1996. When the next eruption could take place is anyones guess. The Department of Conservation has set up emergency systems to monitor the volcanoes so hopefully locals and emergency teams will have some warning next time it blows. See, I told you it was an exciting park.
This was actually our third time visiting the park and the second time we had arrived ready to do the Tongariro Alpine Crossing. New Zealand weather is unpredictable and even more so at altitude. The first time we attempted to do the crossing was early spring. We arrived at the mountain which was blanketed with fog. We called the transport company who said they would not know if the trip was on until the next morning. As we waited by the roaring fire in the chateau, the fog socked in and then the ice began to form. The ski hills were closed and we were not going hiking. Fast forward four months to summer and it was time to try again.
We arrived with our friends Ellen and Tom from s/v Rasa Manis on a sunny Saturday afternoon. As we checked into our rustic cabin, we found out that the trail had again been closed for the last three days because of rain and extreme winds. The woman in the office thought it looked good for Sunday, but like the last time, we would not find out until the morning of if the trail was open. That night we packed our packs and got our all weather gear laid out. This was hike that could require hats, gloves and serious rain gear.
Sunday morning we woke up to a sunny day. This was a good sign as we boarded the shuttle bus to the trail head. After a twenty minute ride we arrived at the trail which was extremely crowded. Apparently all of the people who had been waiting while trail was closed for three days showed up that day ready to go. You will see in photos just how busy the trail was. We looked like an army of ants meandering over the mountains.
The hike itself is 19.4 km which is just over 12 miles. Typically the hike takes anywhere between 6-8 hours depending on stops, ability and of course conditions. As we started out it was a fairly nice morning. A little chilly which was great for hiking but soon it started to drizzle and then rain and by the time we started going straight up the wind was blowing. Near the summit we had no visibility and gusts up to fifty knots. Sounds bad and it was, but still it was an adventure and I could not help feeling a bit like a gnarly mountain climber.
Because of the all the rain we missed out on a lot of the scenery. The crater lakes is on of the most beautiful sections, and for about thirty minutes the sun popped out just as we skidded down the ankle deep volcanic soil. We enjoyed a lovely lunch at the banks of the gorgeous blue lakes and watched as the hillsides steamed. The rest of the hike was great with ever changing weather. We arrived at the end in just over six hours a bit soggy with sore feet, but adventure was had by all. The next day the mountain was again closed because of strong winds so we felt lucky to have had good timing on this one. 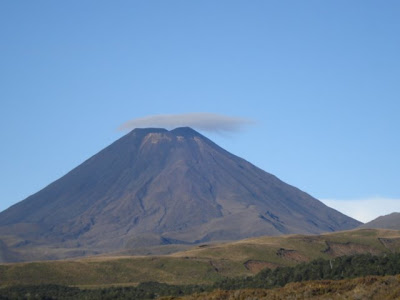 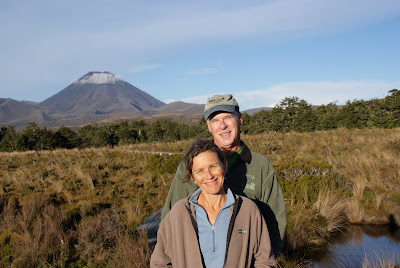 Tom and Ellen in the alpine bog 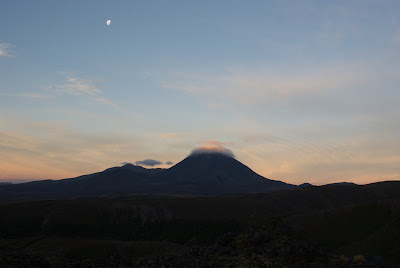 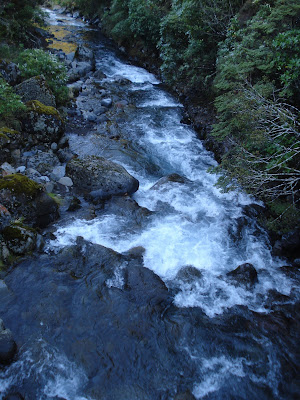 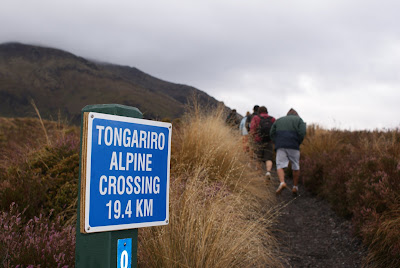 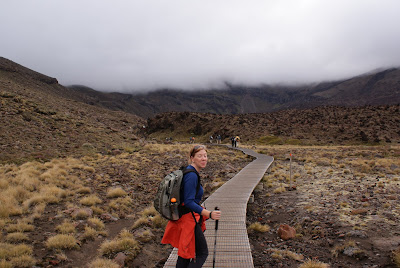 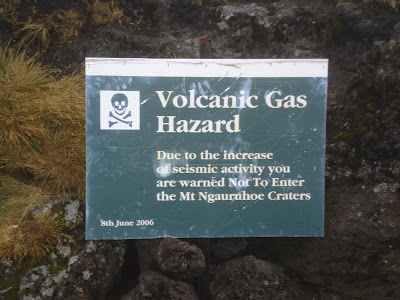 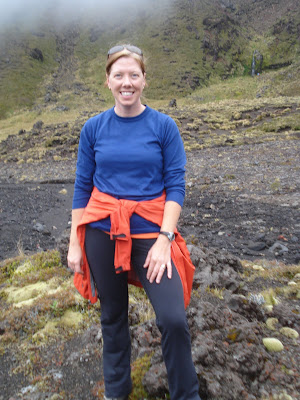 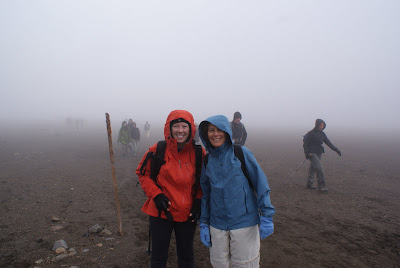 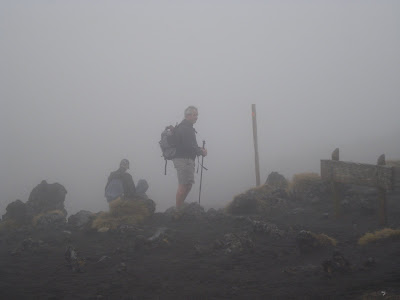 Mark in the mist 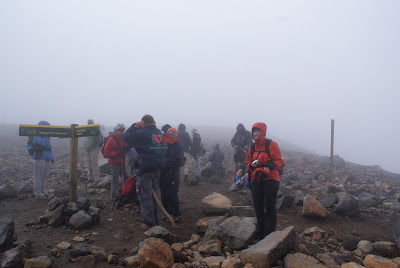 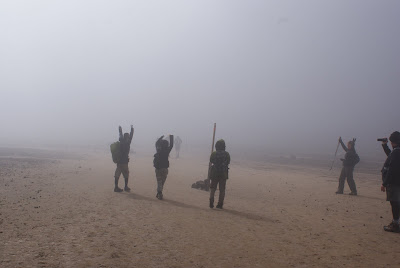 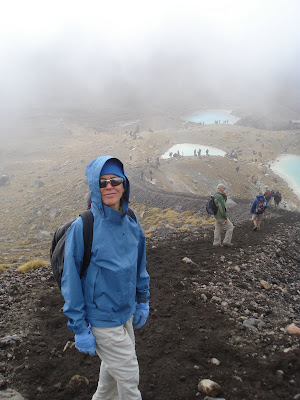 Ellen heading down to the lakes 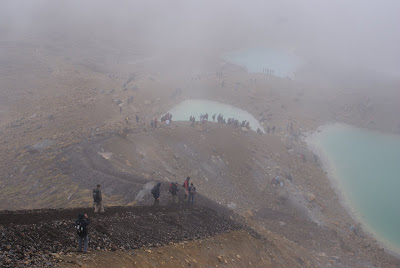 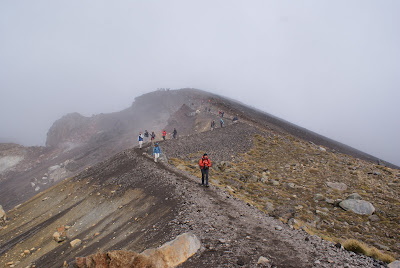 Me sliding down the trail 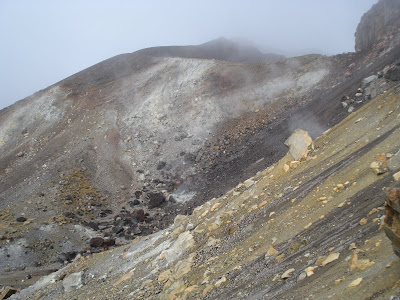 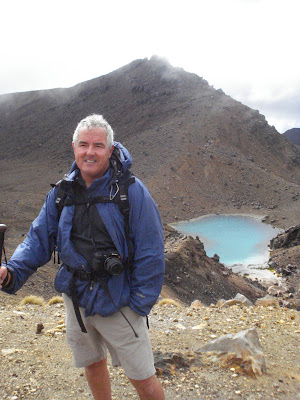 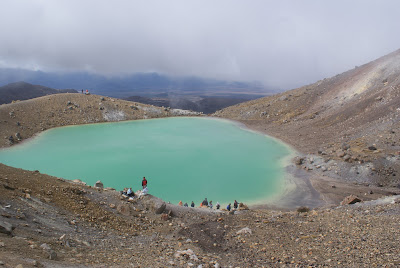 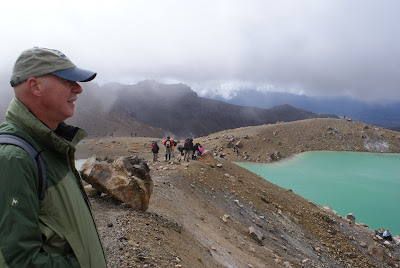 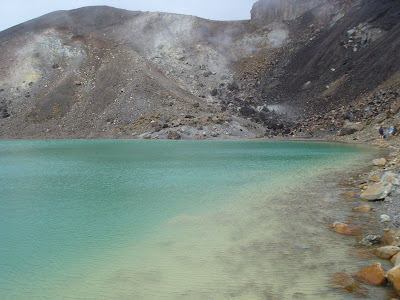 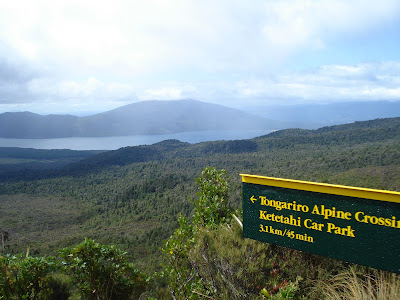 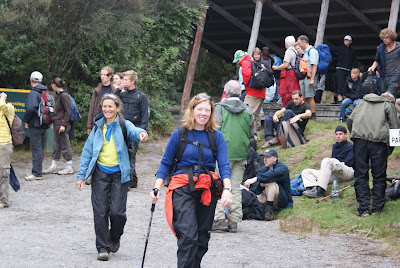 Ellen and I arrive at the end , notice the hoards of people