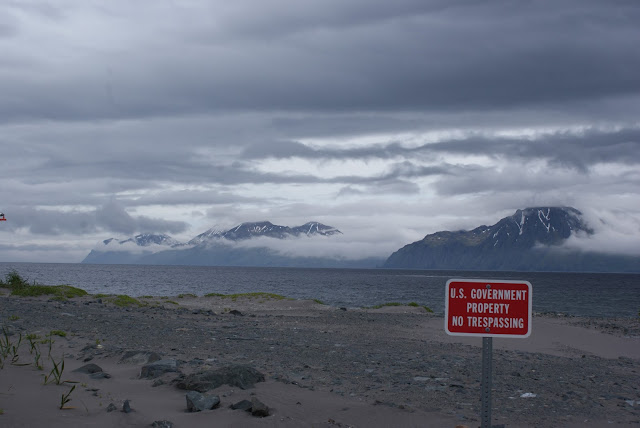 Mark and his crew, Jennifer and David arrived at Adak Island on Wednesday!  After a very rough 20 days at sea they decided to stop in Adak, which on of the Aleutian Islands, for a much needed rest.  They had about five days of large and uncomfortable seas.  A big wave slammed Scholarship and soaked the engine room via the vents.  This prompted a saltwater soak of the battery charger.  As a result, it was dead and the back up battery charger was only working intermittently.  Mark and the crew were hand steering to save energy. They are now getting a well earned rest! Adak is an island with a military history.  At one time there were over 6000 military personnel living in this out-post.  Now there are about 150 people in this quiet spot.  Mark reports everyone to be very friendly and they have been invited over for a caribou bbq.  I am sure any new faces would be welcome at such an isolated place. Mark and the crew were hoping to depart on Saturday but it looks like another gale will keep them in port until Monday when they will head to Dutch Harbor on the island of Unalaska.  More soon. Liz

I have spent the last month trying to get into this account.  Every time I tried to log in I would get an email from Google telling me someone tried to sign in with my password in a strange location.   Google told me they thwarted this attempt and they seemed rather smug about it.  There is no live person or ability to email Blogger.  How I finally got in is a mystery to me.

It's been six months and a lot has changed.  The last blog found us sweating is up in Puteri Marina in Johor Barhu, Malaysia.  After three weeks hiding in the air conditioning we did an epic trip home to the US with a very wiggly toddler.  We arrived in LA for the weekend and to meet our new nephew Spencer.  Then it was on to Phoenix for a couple of months to visit friends and family.

On April 1st Mark flew back to Malaysia to meet his crew David and Jennifer.  The three of them set off on April 7th on a 6000 mile journey from Malaysia to Alaska.  The sailing has been intense with stops along the way in Borneo, the Philippines and Japan.  They are currently about 1500 miles from their destination in Alaska.  Dylan and I have missed Mark terribly and did not make the choice to be apart lightly. The North Pacific is notorious for gales and very cold weather even in summer.  There was no choice.  You could not take a toddler on this kind of journey.  The good news is we will have our beloved Scholarship home in the US after eight years of sailing the Pacific. Since we decided not continue West the choices were to sell Scholarship, or bring her home.

Dylan and I are waiting eagerly in Phoenix.  We talk to Mark everyday via satellite phone.  When they are within 500 miles or so we will be on our way to Alaska to meet him.  Oh what a reunion it will be!
Posted by Liz, Mark and Dylan at 1:25 AM No comments: