West Bay on Middle Percy Island is a very beautiful and some say, an obligatory stop while traveling up the Queensland Coast.  Boats passing through leave their mark in the large "A" frame hut.   Constructed over fifty years ago as a gathering place for visitors,  we could see that this quiet place had seen many a party over the years.

Just a few weeks out of Brisbane we headed to Rosslyn Bay, home of the Keppel Bay Marina.  Our Dutch friends the Van Wissens were traveling the Queensland coast and we were eager to catch up with them before we depart Australia in July.  Last time we saw them was in Brisbane, just two days before Dylan Claire was born. The family of four had spent the weekend on board and  Mark and I commented that it was the giggle of 8-year-old Jasmijn that made our baby girl come two weeks early. 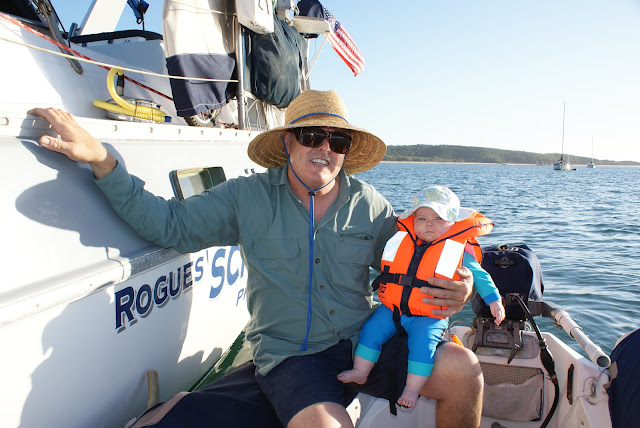 We set out of Pancake Creek early in the morning to head north to the Capricorn Coast.   After two sailing days which included one teething baby and one very rolly anchorage we arrived at the lovely Great Keppel Island.  We were not sure was a Keppel was but nevertheless we tucked in on the north side of the island in fifteen feet of turquoise water.  This was our first peek in a long time at gorgeous white sand beaches and clear water.  Great Keppel was a perfect place to stretch our legs after several days on board.   The island is covered with trails, all indicated by lovely hand-made markers.  We even got to try out Dylan’s “Queen of Sheba” back pack . Our little sailor was so comfortable that she was sleeping soundly with her little legs dangling by the end of the afternoon. 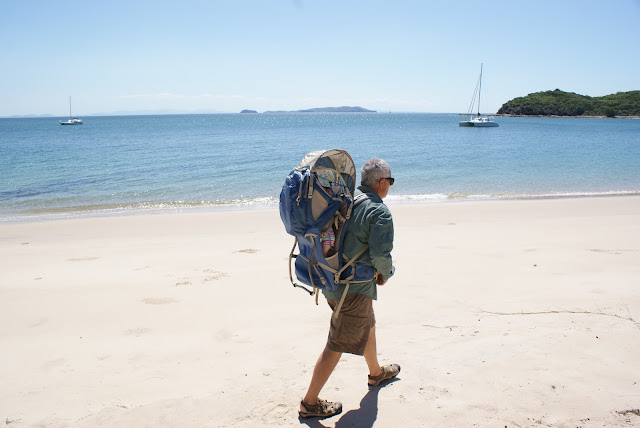 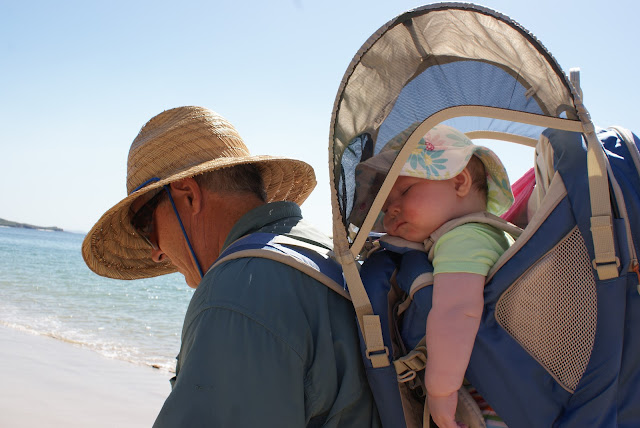 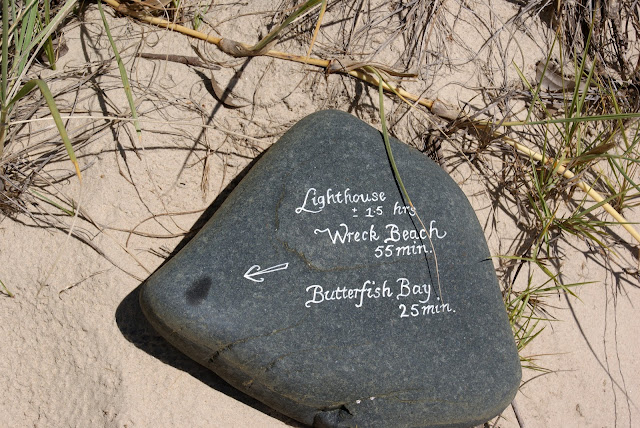 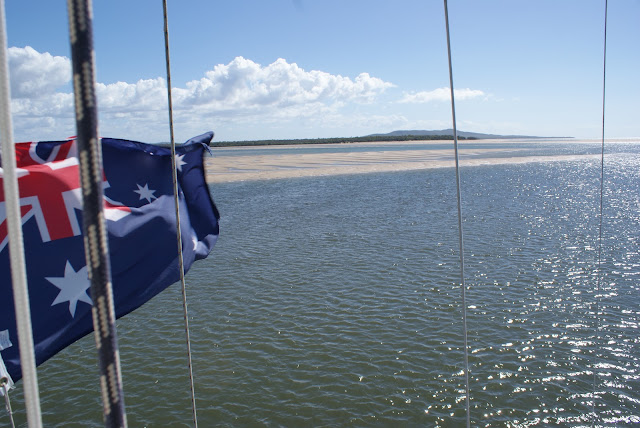 After 48 hours at sea we landed here in this gorgeous and calm tidal river.  We chose this destination because of the promise of calm after two days at sea.  It did not disappoint, as we savored three lazy layover days getting some rest and patting ourselves on the back for finally getting back out there. For two days Jack Johnson lyrics rattled around in my head. Mark has promised me a feast when I consented to two nights at sea. And there was pancakes, banana to be exact and bacon, lots of bacon.  Will sail for bacon....
Posted by Liz, Mark and Dylan at 11:01 AM No comments:

Baby steps my ass, She ran with it…

Not literally but in essence. We said good bye over the last few days at Scarborough Marina, our home these past few years. We left at first light on the high tide and followed our GPS track through the shallow waters that are Moreton bay. The winds and the seas gathered strength gradually as we gained deeper water. By noon we could feel the heave of the Ocean.  The winds were out of the south east and we were headed north to the Great Barrier Reef. We had places we could hide if things didn’t go well. We kept passing them one by one through the day. By night fall the winds were in full swing and the seas were boisterous. Moving about with the baby in your arms demanded special awareness and a sense of when the next roll of the ship was about to hit. Sometimes your timing would be off and the couch would come roaring up and sit you down or throw you armless from one wall to the next down the small hallways.  At sunset play time in the cockpit, throwing Dylan up in the air while still holding on to her had such a sense of immediacy, such utter fatality attached to it that the shocked face of dread on the Momma made it impossible for either one of us to have any fun. We managed to get her a sponge bath and bolster her into her bunk. Almost instinctively her legs shot out to brace against the lee cloth on one side and the pillow on the other and was soon fast off to sleep. (I heard once that children who grow up on boats get a really big big toe.  This no longer seems as outlandish as it did when I heard it. All I ask of you is that you try not to stare until she’s at least out of high school.) We ate what we could that was easy and alternately stood watches and slept on a makeshift bed on the floor in the middle of the boat. The aft cabin was rendered useless by the severe motion of the boat. We tracked several tankers on our AIS (one of those magic black boxes on boats that tell you all about every ship within 48 miles) and in one case we radioed one and asked for a port to port pass. We did this not because we were on a collision course for an uncomfortable amount of time.  We wanted to make sure he saw us. A mile and a half is not a long distance to pass next to a 700 foot tanker in the middle of the night. Needless to say we didn’t get a lot of sleep that night. Nor the next, as we barreled our way north in fully developed seas with some swells a majestic five meters in height. Dylan, ever the trooper, slept like a baby ten hours the first night and nine the next. By three in the morning on the third day we had gone way too fast and had to slow the boat down in order to be at the headland by daylight.  We double reefed the main, rolled up the jib and even streamed warps out the back to provide more drag. After all this I could barely get the boat speed under five knots. It proved just enough. By day break we could see the breakers on some well charted, off shore, rocks that guarded the entrance of Pancake Creek. Exhausted and encrusted in salt we dropped our anchor a mile up the flat water tidal creek.  We watched anxiously over the next six hours as the tide emptied the bay exposing dry land all around us and leaving us with only twelve feet of water smack dab in the middle of the channel. I’ll chalk it off to the luck of the Irish.  “Sleep, Sleep, that which knits the raveled sleeve of care”. Baby Steps, my ass….